Ten Cool Sportscars Toyota Has Ever Made

Think again if you think Toyota can only build dependable, practical, boring cars! The Japanese car manufacturer has built some great sports cars for enthusiasts, according to the car dealerships near Santa Ana. 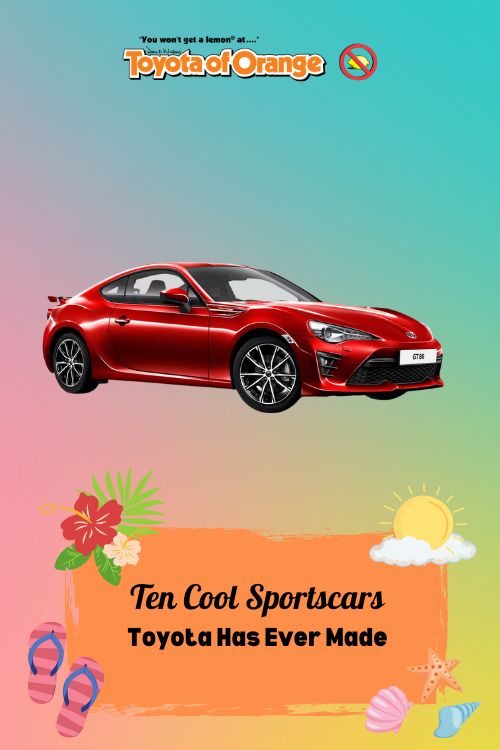 Italians are on top of their game for bringing us spectacular sports cars, while the Germans and the English are at a close second and third. They have been manufacturing cars for ages and have established a lasting brand reputation. Although Japan came late in the game in the auto industry, its dynamic worldwide expansion gave them a seat amid the titans. Nowadays, they are the third-largest manufacturer of passenger cars, with Toyota providing the extent of the total units. Although you get performance, status, and handling from the European sports cars, Toyotas promise us reliability and affordable performance, citing the car dealerships near Santa Ana.

In the 1990s, Toyota went through its golden era when Japanese sports cars were ageless icons, but Toyota has produced sports cars since the late 60s. Although the Japanese car company is more reputable for manufacturing dependable, durable, boring commuting tools such as the Toyota Camry, they have also produced some amazing sports cars for enthusiasts. Here are the most incredible Toyota sports cars ever made.

Toyota debuted the Supra in 1979, but the first three generations went unnoticed. However, in 1993, the fourth generation A80 Supra arrived with effortless styling and the distinguished 2JZ engine and is the most well-known Supra to date. Interestingly, Toyota stopped producing the model because of poor sales. Nevertheless, its growing popularity convinced Toyota to bring back the nameplate in 2020.

The MK4 was a no-brainer choice for drifters and tuners and was celebrated as a cultural icon after featuring in the Fast and Furious franchise and numerous video games.

Most of the time, you will hear about beginner motorcycles, but it is very exceptional to learn about beginner sports cars. Nevertheless, if you ever come across such a list, the Toyota 86 will be there somewhere. It is good on the pocketbook, has a great RWD platform, provides sufficient power to get excited and probably in some hot water, and is one of the last cars to feature a manual.

The GT86 is fast and affordable enough for those who can't go all the way out on costly options. It has a robust chassis, polished aerodynamic silhouette, sharp handling, and the right proportions to be manageable.

Nowadays, modern Toyota sports cars can return to their roots through the Sports 800, the first Toyota sports car and ancestor of a good time, according to the dealers of new and used cars serving Santa Ana. The Toyota S800 was light, more aerodynamic, and economical, and everyone was upset that Toyota never decided to export it. It was much more than a sports car, a breakthrough that probably brought us the GT86s, 2000GTs, and the Supras of this world.

Manufactured between 1965 and 1969, the S800 was equipped with an air-cooled two-cylinder 0.8-liter engine, generating a humble 44 horsepower. However, it weighed just under 1300 pounds and sped around with no issues at all.

According to car dealerships near Santa Ana, the Toyota MR2 is one of the most underrated sports cars you can purchase. It was Toyota's first and only endeavor at a mid-engined car. During its 1985 launch, it won the Japan Car of the Year award and matured into a nice sports car by the turn of the century.

The MR2 is one of the best-handling Toyota cars ever. It was a fun-to-drive car but still cheap to run, earning it more acclaim.

It's a fan favorite with drifters and for everyone else. Also known worldwide by its chassis code AE86 or Hachiroku veterans, the Corolla GT Coupe is one of the best cars to learn how to play around with a rear-wheel drive. It highlights classic RWD balance and comes in charming mechanical simplicity.

Its great respect comes from the racing driver and Drift King Keiichi Tsuchiya, who showcased his skills on his AE86 and led the creation of the first legitimate drifting event, the D1 Grand Prix.

The car won immense applause for its tuneful 1.6-liter twin overhead cam engine. Maybe the most popular AE86 is featured in the classic Manga series Initial D in 1995 and the 2005 live-action remake.

Before the Sura was on the scene, the Celica was Toyota's fan-favorite sports car and the Japanese car manufacturer's first real sports car that reached the North American market. The Celica was prevailing over the Safari Rally and Rallye Cote d'Ivoire by the third generation.

The next generations prevailed, Group A winning two constructor titles, and Carlos Sainz, Juha Kankkunen, and Didier Auriol both won four driver titles. The GT-Four (which was not sold in the U.S market) is a powerful but usually disregarded rally homologation Celica.

The GT-Four changed throughout three generations, with an increase in power and decrease in weight. The final upgrade arrived in 1994 and may be the most desirable version, an all-wheel-drive producing 240 horsepower from the two-liter turbo engine.

Toyota brought back the sports car after two decades of absence. Demand for the MK4 supra increased after it left the market, and it's a pity Toyota took such a long time to bring it back. The fifth-generation Supra has proven an incredibly capable sports car, available in two trims, a punchy 3-liter turbo six-cylinder, and a 2-liter four-cylinder unit.

This tool allows you to look up official EPA fuel economy ratings for vehicles back to the 1984 model year.