Which 2022 Venza Is Best For Your Buck

The Toyota dealer near Tustin tells us that the 2022 Toyota Venza is a sassy and sharp-looking hybrid midsize SUV model. It's ideal for drivers who are looking for a vehicle at Tustin car dealerships and want to save money on fuel but still want a vehicle that has a luxury aesthetic. So, the million-dollar question is: Which 2022 Toyota Venza trim is best for your buck? 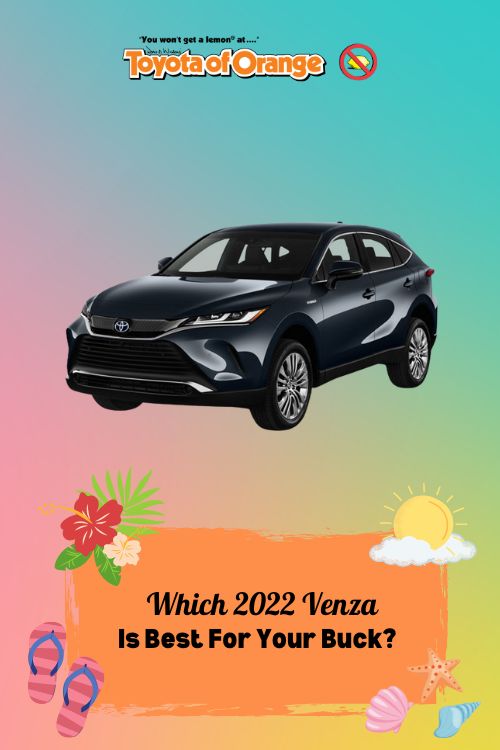 Should You Buy The 2022 Toyota Venza?

The Venza is one of the few Toyota vehicles that only come with a hybrid powertrain. The Toyota dealer near Tustin reminds us that Toyota is a pioneer in hybrid technology. The Toyota Prius was one of the first mass-produced hybrid vehicles in the world. Even though people didn't stand up and cheer when it debuted, the Prius paved the way for new hybrid vehicles such as the Venza and RAV4 Prime.

The Toyota Venza has a 2.5-liter four-cylinder engine and three electric motors to generate 219 horsepower. It achieves 40 miles per gallon in the city and 37 miles per gallon on the highway. The Venza is worth buying if you want a midsize hybrid SUV with a luxurious vibe. The Venza has interior and exterior features that look very similar to some of its Lexus luxury counterparts that the Toyota dealer near Tustin is selling.

Which 2022 Toyota Venza Trim Gives You The Most Value?

Many claim that the 2022 Toyota Venza XLE is the perfect Venza trim for your money. The Venza XLE begins at $36,425. It is equipped with an auto-dimming rearview mirror with HomeLink, a feature that can be programmed to open garage doors by pushing a button on the rearview mirror. It also has a leather-trimmed steering wheel, SofTex-trimmed seats, and heated front seats.

You can only get the Venza in a hybrid version. Its power setup comprises a 2.5-liter four-cylinder gas engine and three electric motors that develop 219 horsepower.

All-wheel drive is standard: One of the electric motors energizes the Venza's rear wheels while the gasoline engine and the other two motors have the task of rotating the fronts. It accelerates at 7.6 seconds to 60 mph.

When it comes to Venza's interior, the car has the same size interior as the RAV4. Overall, the Venza's interior is very good. Toyota's most recent (optional) 12.3-inch infotainment screen gives you a user-friendly interface and menu structure. Underneath the screen are upgraded touch-sensitive controls for the climate control and radio. They work well enough and are responsive, but you may still prefer standard push buttons and knobs.

The Venza is very easy to climb in and out of and provides excellent forward visibility. The thick rear roof pillars block some of the natural view over the driver's shoulder, but blind-spot monitoring comes standard to help you out as you change lanes. The Limited trim has a 360-degree parking camera system that takes much of the assumption out of moving in tight spaces.

The 2022 Toyota Venza has all the neat gadgets and gizmos such as Apple CarPlay and Android Auto as standard features. Also, there are advanced driver aids, and many come as standard equipment. Adaptive cruise control works down to a complete stop, and lane-centering assist keeps you in bounds without jumping all over lane markers. It's one of the more thorough and well-executed systems in the segment. Four USB ports and a wireless charger provide power on the go for all devices on board, so everyone is kept happy, and their devices stay fully charged.

Also, you have to learn about the Venza's optional tint-on-demand electrochromic panoramic sunroof. By just pushing a button, you can switch from clear glass to opaque white. It effectively barricades much of the direct sun and heat but keeps a bright cabin space.

Is The Toyota Venza XLE An Amazing SUV?

The Toyota Venza XLE is a good-sized midsize hybrid SUV, but if you are looking for something with more power, it's best to opt for the RAV4 since it's the more practical Toyota SUV.

This tool allows you to look up official EPA fuel economy ratings for vehicles back to the 1984 model year.